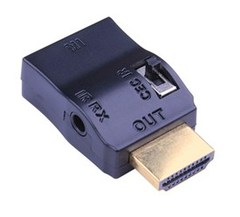 The Super IR HDMI Control System is 1080p Full HD 3D Ready and will also work with sources, displays and other electronics connected via high speed HDMI cables. For example, an HDMI Adapter may be installed on both ends of an HDMI cable (an additional adapter is required) connecting the source and the display. An IR Transmitter and an IR Receiver are then connected respectively to the adapters with the toggle switch set to 'IR'. This allows IR commands to travel between the display and the source. This path can also be reversed to allow IR commands to travel between the source and the display, by reversing transmitter and receiver positions on the HDMI cable. Thus upstream or downstream IR communications are possible.