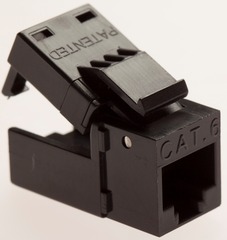 The Platinum Tools 706BK-40 Black Keystone Cat6 EZ-SnapJacks are 100% re-useable, and are designed to exceed TIA/EIA-568-B.2-1 Cat6 cabling standards.  They provide an integrated wiring guide that shows you exactly where each pair of the Cat6 cable should be positioned prior to closing the jack which creates the self-termination mechanism.  The 706BK-40 Cat6 EZ-SnapJacks are designed to fit into all standard keystone wall plates, decora inserts, blank patch panels, and voice & data surface mount boxes. They provide ease of use with the performance you need in a high speed Cat6 network environment.

Use the Platinum Tools 706BK-40 Black Keystone Cat6 EZ-SnapJack 40 Pack to quickly create the Cat6 outlets you need to manage all your network ready components, devices, and electronic peripherals.  These are the fastest and easiest Cat6 jacks to terminate in all Cat6 network installations.