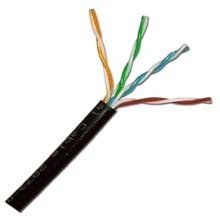 The 5E0SPBK2-T Direct Burial Outdoor Rated Cat5e Cable is a 350 MHz high performance network cable designed to support high performance network applications where the cable is installed outdoors or in the ground. The 5E0SPBK2-T uses a special internal water block tape construction that stops all moisture from entering the cable jacket that could cause future corrosion or signal loss.

How common is the use of direct burial Cat5e?

Direct burial rated Cat5e cable is getting more and more popular as people are adding or installing network devices in the outdoors. There are numerous applications in both a home and business network installation where direct burial rated Cate5e is vital. Some of these applications include installing IP cameras, connecting two buildings in a network, using Cat5e as a CCTV cable to carry video, installing phone or internet services in a back yard, or any other applications where Cat5e cable is installed in an outdoor environment.

When should I use Direct Burial or Outdoor Rated Cat5e Cable?

Whenever you have a Cat5e cable installed in the ground or outside exposed to the environment you should move to a direct burial rated Cat5e cable. This cable type is suitable for being buried directly into the ground, but it is also UV resistant so it will protect the cable from sunlight, rain, and any other environmental conditions that could cause the cable to fail.

I noticed that your 5E0SPBK2-T uses water block tape. What is that?

Both of them are just as effective for installations where the cable is buried or exposed to the environment. The water block tape type is much cleaner and easier to work with where the gel filled type is the opposite. The gel filled Cat5e cable has been around for a longer time so most people are use to using it in their network installations. It really comes down to personal preference. If cost is a concern for you the water block tape Cat5e cable is much less expensive due to less manufacturing steps when making the cable.

No. The performance of a direct burial rated Cat5e cable is never affected. The only difference is the outer jacket and the material that is inside protecting the copper pairs from moisture.

Do I need special connectors to terminate direct burial Cat5e?

No. The standard RJ45 modular connectors will work fine with direct burial rated Cat5e. There are no special connectors, jacks, or parts to buy.

Should I install my direct burial rated Cat5e in a conduit?

Even though this cable is called "direct burial" it is always best practice to install your cable in some type of conduit when putting it in the ground. The conduit will make it much easier for you to repair, replace, or add cables in the future. Plus using a conduit will only add more years to the life span of your cable. If you use a conduit and your cable goes bad, it is much easier to pull a new cable through the conduit instead of having to re-dig an entire trench. Using a conduit to install underground cables is always the best installation method.