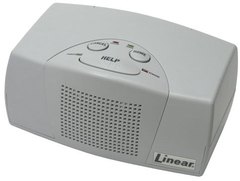 The Linear SSC00066B PERS-3600B Personal Emergency Reporting System is a supervised wireless emergency reporting product designed for personal use. The table-top PERS-3600B Console provides pushbutton emergency assistance to anyone who desires additional security and peace of mind. For the visually impaired, each button on the Console is molded with braille characters to identify the button’s function.

The PERS-3600B Console can receive signals from up to 16 Linear wireless transmitters. Activating a transmitter causes the Console’s digital communicator to send the appropriate alarm report to the central monitoring station via the standard telephone network. In addition to the central station report, audible and visual indications occur and the alarm relay energizes during an emergency activation.

The optional activity timer can be set for 8, 12 or 24 hour operation or disabled. The emergency alarm will trigger automatically if the time set elapses before an activity transmitter is triggered or the PERS-3600B Console’s HOME button is pressed.

To simplify operation, the PERS-3600B Console can "speak" to the subscriber with its built-in digitally synthesized voice. The Console will say "emergency", "fire", "timer done soon", and other system operation, setup, and supervisory prompts from a 49 word vocabulary. If necessary, the voice option can be disabled.

As a special feature, the PERS-3600B Console can record and play up to approximately eight 15-second audio reminder messages. The reminder messages can be used to help the subscriber remember to take medications, call someone, get ready for an appointment, etc. Each message is controlled by a real time clock and can be programmed via the RA-2400 software to play daily, every other day, weekly, or monthly. Reminder messages are played and repeated in three-minute intervals for either 15 or 30 minutes (programmable) until canceled. Messages can also be programmed for single-play.

The PERS-3600B Console can be programmed to act as a remote controlled "speakerphone". With the speakerphone mode enabled, the Console will monitor the telephone line for an incoming call. Activating any emergency transmitter (or the Console’s HELP button) while the telephone is ringing will cause the Console to seize the line and begin speakerphone communications. Activating any emergency transmitter (or HELP button) during the call will disconnect the line. The PERS-3600B Console will auto-disconnect after 15, 30, or 60 minutes (programmable).

Supervised transmitters regularly send status reports to the PERS-3600B Console and low battery reports when their batteries are low. When the Console receives a low battery report, the STATUS indicator blinks. If the Console fails to receive a status report from a transmitter for a period of 24 hours, the STATUS indicator will light. All supervisory conditions can sound a local annunciation and be reported to the central station (optional through programming).

The PERS-3600B Console’s digital communicator can route calls to three telephone numbers: primary, secondary, and supervisory. General reporting codes and individual sensor reporting codes are programmable for the 4x2 format. Alternately, Ademco Contact ID format can be selected. The telephone line is constantly monitored, line failure and restoral will be locally announced by the Console (optional through programming).

Powered by a low voltage plug-in transformer, the PERS-3600B Console has provisions for a rechargeable backup battery for operation during AC power outages. A power switch allows for out-of-service storage of the Console without discharge of the battery. The battery is recharged by the Console, even if the POWER switch is off (as long as the transformer is plugged in). If the backup battery becomes low, the POWER light will flash and the condition can be reported to the central station.

Installation and programming are made easy by Linear’s RA-2400 remote access software.