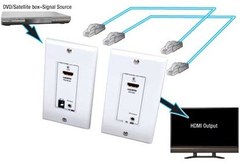 The Vanco 280725 HDMI Wall Plate Extender over 2 UTP with IR Control is the perfect solution for sending a long distance HDMI signal from an AV component to a HD display and transmitting an IR signal back to that component from the display. It extends 1080p resolutions up to 164ft over dual Cat5e cables, and a 180ft over dual Cat6 cables. The Vanco 280725 is 3D READY and perfect for long HDMI cable runs where using traditional HDMI cables is just not an option. It is a powered unit and installed by attaching the included 5V DC power supply directly to the receiver. The integrated wall plate design allows you to create permanent HDMI outlets, which gives your installation the most professional look. The sender and receiver wall plates are designed to fit into all standard single-gang low voltage mounting brackets.

The Vanco 280725 HDMI Wall Plate Extender kit is used to connect the signal source such as Blu-Ray Player, Play Station 3, audio/video receiver, cable or satellite receivers and computers equipped with HDMI output interfaces with a short high speed HDMI cable to the HDMI Transmitter input. Connect the HDMI Transmitter output RJ-45 ports using dual-runs of Cat 5e or Cat 6 UTP cables to the included Receiver, which does not require a power supply. Connect the HDMI output from the Receiver to high-definition display devices such as HD-LCD, HD-DLP and HD projectors with HDMI input interfaces.

The 280725 has the capability of being controlled via IR signals. The switch can be controlled from the display. This is accomplished by using an optional IR Receiver pigtail pointing away from the display(s), which can be connected with the HDMI IR Adapter, and inserted between the HDMI cable connector and the display with the toggle switch at the 'IR' position. The IR Transmitter / Sender / Emitter pigtail is then connected to the switch and pointed at the source(s). A remote control is used at the display to select switch inputs and outputs. (This is only compatible with Vanco's Super HDMI IR Accessories)