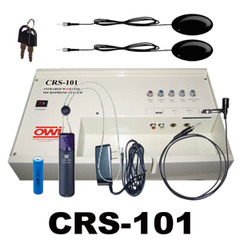 The CRS System is an Infrared (IR) Wireless system that allows the speaker the freedom to move about the room without the restriction of a microphone cable. The two included CRS-IRS IR Sensors allow use of several options of microphones.

The CRS-CASE is an amplified audio mixer that provides inputs for infrared wireless microphones, two unbalanced mono ¼” phono jacks and a stereo RCA line level audio source. The internal amplifier is a clean, powerful 30 watts per channel in a dual mono configuration (i.e. the system outputs the same mono signal to up to two speakers).

The CRS-HHMIC Wireless Microphone (optional) is a HAND-HELD IR WIRELESS MICROPHONE. This option can be used by the speaker for presentation or can be passed around the classroom or audience to allow questions to be clearly heard by all.

The CRS-PMIC is a combination IR Wireless PENDANT MICROPHONE AND BATTERY CHARGER. It gets clipped onto a coat or shirt pocket, or hung around the presenter’s neck on a lanyard and is then used as a wireless microphone allowing for a hands free presentation.

The CRS-PMIC also features a MIC Input that connects to either of the also included CRS-LMIC LAPEL MICROPHONE or optional CRS-HSMIC HEADSET MICROPHONE. These two ultra-sensitive mics provide additional options for hands-free presentations.

The IR Wireless Microphones are similar to ‘normal’ mics in how they detect speech, but rather than directly connecting to a PA or other amplifier, they convert the audio signals into very strong IR pulses (invisible light pulses) that are ‘seen’ by the IR Sensors. The Sensors receive these pulses and output electrical pulses to the CRS-CASE, where the electrical pulses are converted back to audio signals, amplified and output to the speakers.

IR is invisible light and IR systems typically require a direct line-of-sight from the transmitter (microphone) to the receiver (IR Sensors) to operate. The CRS-101 was designed with ultra-high output IR circuitry that allows the IR pulses output from the microphones to reflect off ceiling, wall and hard floor surfaces. The IR Sensors are designed to ‘see’ IR from any direction, allowing uninterrupted presentations.

The CRS-101 System is easy to install and operate. Once set up, it will be ready for class every day. One important point: Just as students need sleep to re-charge, the microphone batteries need to be kept at peak performance levels as well, so it is important to re-charge the batteries before each use.

When not in use, the CRS-CASE provides a secure, locking storage space for the Pendant, Lapel and Headset Microphones, so they will never get misplaced.

The CRS-101 when combined with OWI’s P5278 Bookshelf or IC5 or IC6 in-ceiling speakers help create professional easy to hear presentations of both spoken content and audio from external sources such as CD/DVD players, Computers, Cable, Satellite, VCR, etc.

• The CRS-101 accepts 3 different line level inputs. It can also control 2 infrared wireless microphones at the same time.
• Each device can have its volume adjusted by independent controls to get the best audio  effects for each room layout.
• Customize each room with two or four available OWI ceiling or surface mounted speakers.
• Convenient locking storage box for microphones.
• UL Listed