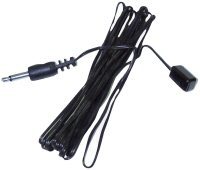 The Channel Vision IR-3001 is a single IR emitter flasher used for IR control systems is home theater and A/V applications. The IR-3001 will be used to control one device in a IR system solution.